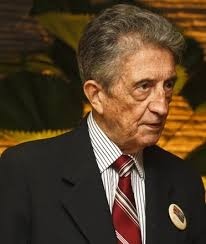 Dr. Francisco Cardoso Gomes de Matos is Emeritus Professor of Linguistics, Federal University of Pernambuco, Recife, Brazil. He teaches Linguistic Rights at that university`s Specialization Course in Human Rights and Applied Linguistics. Professor Gomes de Matos has presented more than 80 papers in national, regional, international conferences in Brazil, Belgium, Canada, France, Germany, Italy, Spain, Sweden, the United Kingdom, and the United States. A world pioneer in Peace Linguistics since 1993, he has published four books thereon, two of which in Portuguese and two in English. He was a Visiting Professor of Applied Linguistics at the Anthropology Museum (Mexico City), the University of Ottawa, the Catholic University of São Paulo, and a Fulbright Visiting Professor of Portuguese at the University of Georgia, Athens, USA. He was visiting coordinator of CENFI-Centro de Informação Intercultural – in Petrópolis, Rio de Janeiro. Gomes de Matos is also internationally known for his work in Linguistic Rights: he is the author of the pioneering (1984) Plea for a Language Rights Declaration and he chaired the UNESCO-sponsored International Seminar in Human Rights and Cultural Rights at the Law School, Federal University of Pernambuco (1987), the outcome of which is the Declaration of Recife (on Linguistic Rights). Active in Human Rights, Dr. Gomes de Matos is a co-founder of the Dom Helder Camara Human Rights Commission, Federal University of Pernambuco. He is also co-founder of ABA Global Education, an organization established in Recife, Brazil, 25 years ago, and co-founder of the World Dignity University initiative. His most recent book is Dignity. A Multidimensional View, published by Dignity Press, 2013. Another sustained commitment of his is centered on applications of the Nonkilling Approach, as can be seen in his book Nurturing Nonkilling. He likes to characterize his current mission as that of helping contribute to the global education of DIGNIFIERS.