Jo-Ann Triner on The Teaching and Learning of Love

Helping children grow in selfless love is essential to humanity’s evolutionary leap forward. We simply can’t have a civilized society and aspire to world peace when this area of teaching and learning is overlooked. Erasmus summarized this best in the 16th century when he urged us to remember that without an education of the heart, we have no humanity at all.

Among the countless ways to teach selflessness and compassion for others are School Community Partnerships that sensitize children to the needs of all earthly creatures and the planet itself. Such learning is both cognitive and affective. At first children learn what caring for others looks like. They comprehend, though their feelings of empathy still require awakening. When directly involved in the giving, however, they grasp what it feels like, experiencing the euphoria of helping firsthand. Compassion is then internalized where it has staying power.

Third graders at Liberty Elementary School in Worthington, Ohio enjoyed participation in one such partnership with The Columbus Zoo via a program called Partners in Conservation. Founded by gorilla keeper, Charlene Jendry and others, the program was designed to benefit both people and wildlife in Rwanda and the Democratic Republic of Congo.

As third graders focused on the endangered mountain gorillas of Rwanda, they learned about an orphanage nearby and a very special young man by the name of Frederick. During the genocide, he had witnessed the massacre of many and was ordered by machete-wielding perpetrators to kill other people. When he refused, they severed both of his arms. Unable to feed or clothe himself, the orphanage offered him refuge beyond his sixteenth birthday, the typical age of release from their care.

On learning this, the students exuded extraordinary compassion and supported an action plan on his behalf. With the help of adults at the zoo and their parents, they raised enough money to fly Frederick into Columbus, Ohio where doctors charitably arranged to provide him with prosthetic arms.

Their orchestrated efforts made it happen for him, and on this special day, he appeared at the school to thank the students and demonstrate for them his new prosthetic limbs. Jack Hanna, Director Emeritus of The Columbus Zoo, and a small entourage accompanied him as well as a camera crew from ABC’s Prime Time. Excitement filled the schoolhouse that day as he walked down the corridors, beaming with joy and warmly greeting the audience of students, parents and teachers.

This young man’s story doesn’t end there. He returned to Rwanda thankful enough to found a community center, specifically for children with special needs. Paying it forward, he is a shining example of how gratitude grows and how acts of love are far-reaching and powerful influencers of a better future.

Children are capable of caring and need us to help them exercise their stewardship of others. Among all the gifts we shower upon them, the opportunity for selfless giving may be the greatest gift of all. 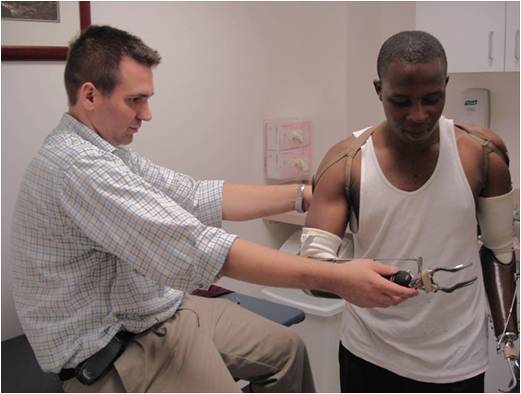 The full story of Frederick is found at this website alongside a picture of him being fitted for prosthetics.