On August 10 of this year the Institute for Research on Unlimited Love (IRUL) emailed a newsletter to more than 800,000 recipients that went viral in the Middle East. It was entitled “An Open Letter to Young Members of ISIS,” and highlighted the fabulous contemporary Islamic writers on divine love, all of whom view ISIS as a brutal distortion of the message of Mohamed and the compassionate nature of Allah.

Three months later on Monday November 10 the website of the Institute was hacked by ISIS sympathizers, and for 24 hours those who visited the website were met with a black page and the words “Hacked By Team System Dz. I love you Isis. The State of Islam and the list expands. God willing.”

This was brought to my attention by one of our Institute advisors, Dr. Durre S. Ahmed of Pakistan, with a 2 a.m. email that morning stating simply, “The website has been hacked!” Team Dz had hacked and defaced an estimated 200 carefully selected websites across the globe. That Monday morning I spoke with our website team about getting this fixed and adding some extra safeguards. In the conversation my colleagues stated that getting hacked by Team Dz was a good indicator of global impact.

Religious arrogance is currently the most dangerous force in the universe. For this very reason it was said by an old friend that we humans with our limited minds know no more about Ultimate Reality than a clam does about the nature of the ocean.

Two days before Dz hacked the IRUL website, I had been up in Pocantico Hills, New York, at the Union Church (built by John D. Rockefeller, Jr. in 1921) visiting Rev. Paul deHuff and viewing the famous Marc Chagall window of the Good Samaritan. Chagall was Jungian in his appreciation for spiritual symbols that have universal significance. That night I heard a talk on the Rockefeller Estate by friend Vivian R. Jacobson, who worked with Chagall for many years. She emphasized how Chagall worked to express “the concepts of hope, peace, reconciliation, and love, which translates into tolerance,” and how he wanted people to realize what their faiths have in common. Chagall also designed the Peace Windows for the United Nations in 1964, which convey the inspiration he derived “from all those who died for peace.” In one of his most famous paintings, The White Crucifixion, the image of Christ anchors the center surrounded by images of Jews fleeing Germany with Torahs in flames. Although a Jew, Chagall understood the cross as representing the suffering of all humanity. “Despite the troubles of the world,” stated Jacobsen, Chagall pained tight up until his death in 1985 because he believed that “in art as in love everything is possible as long as it is based on love.”

Chagall is important to “Unlimited Love” because his window, along with Rockwell’s painting of The Golden Rule, are the two finest artistic renditions of Unlimited Love. Chagall is much more abstract and symbolic, while Rockwell’s work is a main street image of people from every background, race, nation, and religion contemplating “Do Unto Others as You Would Have Them Do Unto You.” Rockwell wrote about the circle of white in the center of his painting that represents the love of neighbor as a pathway to spirit. On the occasion of the 40th anniversary of the United Nations, The Golden Rule was presented in the form of a Mosaic as a gift from first lady Nancy Reagan and was installed on the third floor.

Spiritual progress is real and inevitable. It points toward a time when all people are aware of Pure Unlimited Love as Ultimate Reality and abide joyfully in it as healers in the broadest sense. Chagall and Rockwell had this sort of vision. Let us state a few points that capture my thinking about religions, in the hope that this may be encourage these Team Dz hackers to turn over a new leaf:

1. “In the beginning” was Mind (e.g., Genesis 1, Rig-Veda VIII, 58:2; John 1:1; Quran 36:81), which preceded all matter, and sustains the universe in creative love. This is the transcendent internal unity that the mystics of every tradition seem to experience and describe as all loving, beyond time and place, and underlying all that is;

2. All the great religions emerge objectively from this single divine Source and share in the same essence, although they take on different contours and expressions based on culture and era;

3. The human soul or spirit flourishes in union with this Source and in the love of everyone without exception. The practice of the Golden Rule in its positive form of “do unto others as you would have them do unto you” helps to bring a humble soul into the Source.

4. We should not just tolerate but appreciate differences in religious traditions, which is made easy when we see that there is a final identity of all genuine spiritual-religious paths as they approach the summit of spiritual realization in an awareness of Divine Love;

5. Religions tend to confuse the accidental features and personalities of their traditions with the Source itself, and they then condemn others who do not share their beliefs as life unworthy of life, instead of being thankful for all the wonderful spiritual paths that have evolved over the millennia.

Team Dz placed a message on our site, “Hacked By Team System Dz, I love you ISIS.

The State of Islam and the list expands. God willing.” Our response to Team Dz is to invite their consideration of these five concepts, and to provide them with the images by Rockwell and Chagall for contemplation as they sit at their computers: 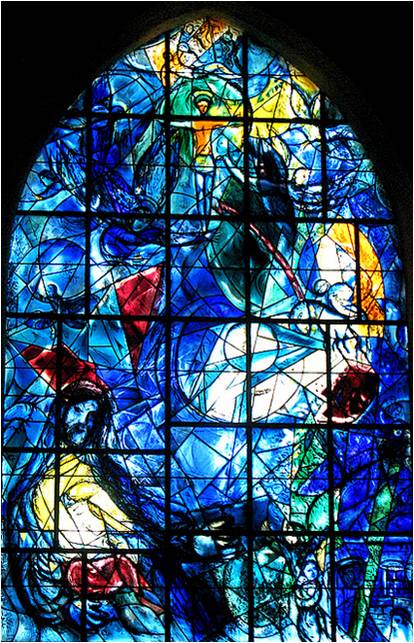 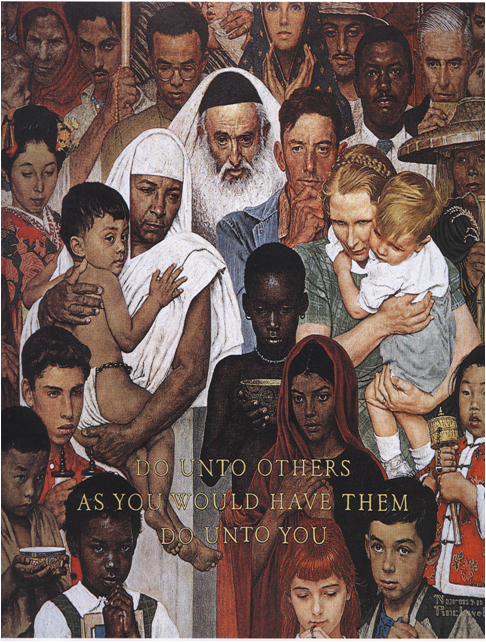